The history of the Fiat X1/9 Abarth Prototipo

In 1973 Fiat looked out for a successor for the 124 Spider Abarth. The choice fell to the recently introduced X1/9. Its advantages, especially the mid-engine, made it an excellent race car. So Abarth produced 6 prototypes, which were used at six national Rallies in Italy, nine in France and for testing. The press and the drivers were enthusiastic about the car. The engine had a 16V cylinder head designed by Abarth (100 pices were built), which was mounted on a 1600 Block rebored to 1756 cm³ (Type Abarth 232) respectively 1840 cm³ (Type Abarth 232 G). Equipped with two 44 IDF (1756 cm³) respectively 48 IDF (1840 cm³) carburettors, the engine achieved 210 HP. The car was faster than the 124 and the successor of the X1/9, the 131 Abarth! 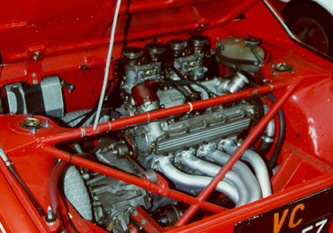 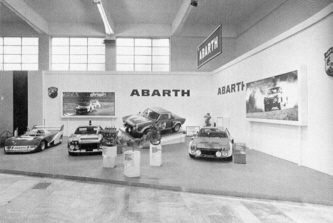 The chassis underwent some modifications. The firewall between the engine and the rear trunk was removed and replaced by a strengthening cross made from tubing. For reinforcement too, a roll bar was welded in which only consisted of two tubes but was welded to the targa bar. In the front trunk, nearly all of the stock sheet metal was removed, the 80-litre fuel tank found his place here. The hoods and doors were made from Plastic, the aluminium roof was rivet to a special  framework. With these lightweight modifications the car came to a weight of 750 kg. From the outside, the most remarkable point was the "snorkel", from which fresh air came directly to the carburettors. The optical appearance was finished with flared wings and a front spoiler unit (which also contained the fog lights), which was riveted to the body. 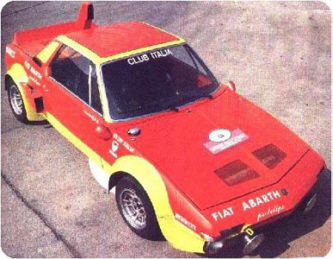 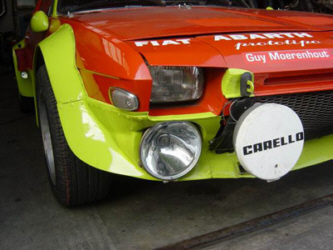 After the Fiat owned company Lancia launched the Stratos into rally sport, a competition between the rally departments of Fiat and Lancia was inflamed. After the rally departments of Fiat and Lanchia fused in 1975, the managers were of the opinion that the X1/9 would be a too similar vehicle. In addition, a potential rally success could substantially increase the sale numbers of one of their mass market sedans. Therefore the company line decided to stop the project X1/9 Abarth and take on the 131 Abarth instead, also by increasing the bad sales numbers of this car in the USA. This car was very successful in rallies, among other things Walter Roehrl drove the 131 to the world championship.

Six units of the Prototipo where built, one is the "Prototype of the Prototipo", 3 race cars, one Stradale and probably one spare chassis. The chassis numbers were going from 23001 to 23005, while the first built car is not in this sequence, it has the chassis number 133. Every car was build by Hand at Abarth and has its own marks, what makes an identification possible.

Al Cosentino, Abarth specialist and publisher of numerous specialized books concerning Abarth,  owns the Stradale version and owned two original racers (see pictures), one of them with the previous number plate TO H02940 and the serial number 133  was used in Daytona 1977.  You can idetify this car by the missing air intakes in the front bonnet and front spoiler. Further this car has 5 bonnet pins on the front bonnet, the other cars had only three of them. This "prototype of the prototypes" was taken from the presentation of the X1/9 at Sicilia in November 1972 and was modified for rallies from autumn 1973.

The third car Cosentino owned had the previous number plate TOL65335 and has the serial number 23002. Cosentino sold both racing cars to an enthusiastic Abarth collector from Japan. This car is now under restauration in Italy, TO H02940 ist also still in Japan and changed the owner in the meantime.

A further vehicle today owns Gino Macaluso, former factory driver and employee at Fiat, today member of the "Club Italia" and chairman of the CSAI. This vehicle was shown at "Auto Moto Retro" in Turin 2002 and in the course of an Abarth exposition in the Italian automobile museum "Bonfanti" (like the 131 Rally Abarth illustrated above). It carries the number plate VC 420157. It is the vehicle with the former number plate TOL 65336 and the chassis number 23003. According to Al Cosentino and Bernard Darniche this car is a "Muletto"; this means a spare car, which was mainly used at tests. Before Macaluso this car was owned by Augusto Cesari, who drove autoslalom events with this car - in 1983 he won the italian Superslalom masters.
Another vehicle with the number plate TOL65337 and the chassis number 23001 is also in Italy. The owner drove some autocross events with it before he restored it. The car is still equipped with a 16 V Abarth engine and in running order.
The sixth car is probably a spare car and is most likely owned by an Italian collector.